A political entity in Western Europe from 800 to 1806. The Empire was in theory a revival of the Western Roman Empire—the political counterpart of the Roman Catholic Church. It was initially known as the Empire in the West. Before 1815, there was no state called Germany, in the sense we now use. There was the Holy Roman Empire, with a ruler called (officially in Latin) the Roman Emperor and which claimed to be in principle the continuation of the Roman Empire which ruled basically all of what is now Germany, as well as pieces of Italy, Austria, the Low Countries [nowadays Belgium and the Netherlands] and a few more In the 11th century it was called the Roman Empire and the title Holy Roman Empire was adopted in the 12th century. Although the borders of the empire shifted greatly throughout its history, its principal area was always that of the German states. From the 10th century its rulers were elected German kings, who usually sought, but did not always receive, imperial coronation by the popes in Rome.

The emperor generally dominated the various states and principalities that made up the German nation (which included present-day Austria, the Czech Republic, part of Poland, Luxembourg, and other bordering areas) as well as northern Italy. The emperor was chosen by electors representing certain states and dioceses, but the position tended to become hereditary, as the electors usually selected the ruler's natural heir. He customarily was crowned emperor by the pope in Rome.

The emperor's power depended largely on his personal and family inheritances, and on alliances. Charles V, for example, when elected emperor in 1519, was also king of Spain and his domain included the Netherlands, Naples, Sicily, Sardinia, and Spanish America. His son, Philip, was the husband of the ruling queen of England (Mary I). Charles gave Austria to his brother Ferdinand, who was also king of Bohemia and of Hungary and succeeded him as emperor. Spain, however, went to his son, who became Philip II of Spain.

The Holy Roman Empire was an attempt to revive the Western Roman Empire, whose legal and political structure deteriorated during the 5th and 6th centuries, to be replaced by independent kingdoms ruled by Germanic nobles. The Roman imperial office was vacant after the deposition of Romulus Augustulus in 476. During the turbulent early Middle Ages the traditional concept of a temporal realm coextensive with the spiritual realm of the church had been kept alive by the popes in Rome. The Byzantine Empire, which controlled the provinces of the Eastern Roman Empire from its capital, Constantinople (now Istanbul, Turkey), retained nominal sovereignty over the territories formerly controlled by the Western Empire, and many of the Germanic tribes that had seized these territories formally, recognized the Byzantine emperor as overlord. Partly because of this and also for other reasons, including dependence on Byzantine protection against the Lombards, the popes also recognized the sovereignty of the Eastern Empire for an extended period after the enforced abdication of Romulus Augustulus.

Romulus Augustus (fl. 461/463 – after 476, before 488), was the last Western Roman Emperor, reigning from 31 October 475 until 4 September 476. His deposition by Odoacer (Flavius Odoacer (433–493, also known as Flavius Odovacer, was the 5th-century King of Italy, whose reign is commonly seen as marking the end of the classical Roman Empire. He is considered the first non-Roman to ever have ruled all of Italy). Traditionally marks the end of the Western Roman Empire, the fall of ancient Rome, and the beginning of the Middle Ages in Western Europe.

He is also known by his nickname "Romulus Augustulus", though he ruled officially as Romulus Augustus. The Latin suffix -ulus is a diminutive; hence, Augustulus effectively means "Little Augustus". Some Greek writers even went so far as to corrupt his name sarcastically into "Momylos", or "little disgrace".

The historical record contains few details of Romulus' life. He was installed as emperor by his father Orestes (died 28 August AD 476, was a Roman general and politician, who was briefly in control of the Western Roman Empire in 475–6), the Magister militum (master of soldiers) of the Roman army after deposing the previous emperor Julius Nepos (c. 430 – 480 was Western Roman Emperor de facto from 474 to 475 and de jure until 480). Romulus, little more than a child, acted as a figurehead for his father's rule. Reigning for only ten months, Romulus was then deposed by the Germanic chieftain Odoacer (433–493, also known as Flavius Odovacer, was the 5th-century King of Italy), and sent to live in the Castellum Lucullanum  (Castel dell`Ovo) in Campania, a southern region of Italy; afterwards he disappears from the historical record. 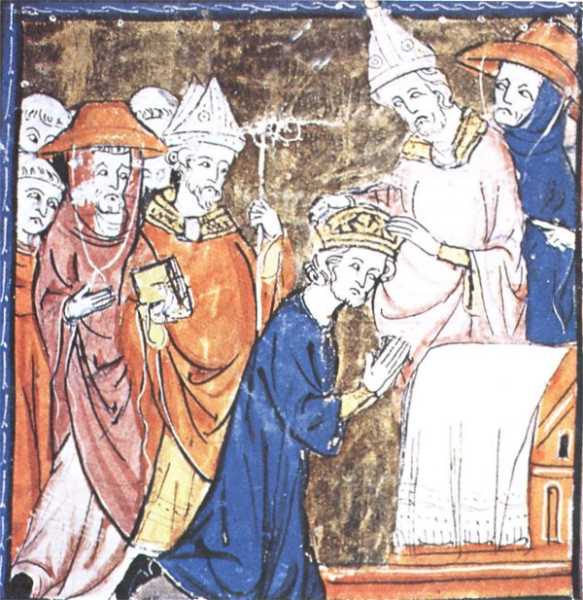 On December 25, 800, Pope Leo III crowned Charlemagne Emperor. When Pope Leo III placed the crown on the head of Charlemagne in St. Peter's, and the assembled multitudes shouted "Carolo Augusto, a Deo coronato magno et pacifico imperatori, vita et victoria!" — "To Charles the Magnificent, crowned the great and peace-giving emperor by God, life and victory!" Strictly speaking, however, Charles's empire was neither Roman nor German, but Frankish — or as we might say, a sort of French-German mix (for that matter, there was a perfectly valid Roman Emperor at the time in any case). The Empire was not officially described as "Holy" until the twelfth century, nor officially "German" before the fifteenth. Charlemagne's empire quickly fell to pieces among his squabbling successors, and the Holy Roman Emperors themselves tended to ignore any discontinuity between pagan and Christian Rome — Frederick I Barbarossa (1123-1190) going so far as to assert that one of his reasons for going on Crusade was to avenge the defeat of Marcus Licinius Crassus by the Parthians. Marcus Licinius Crassus (Latin: M·LICINIVS·P·F·P·N·CRASSVS -  ca. 115 BC – 53 BC, was a Roman General and politician who commanded the left wing of Sulla's army at the Battle of the Colline Gate, suppressed the slave revolt slave led by Spartacus, provided political and financial support to Julius Caesar and entered into the political alliance known as the First Triumvirate with Pompey and Caesar.

However, Charlemagne's empire was divided among three of his grandsons by the Treaty of Verdun (843) and soon broke into numerous feudal states that resisted the authority of the monarchs. Charlemagne's descendants enjoyed the honorary title of emperor. This act established both a precedent and a political structure that were destined to figure decisively in the affairs of central Europe.

The precedent established the papal claim to the right to select, crown, and even depose emperors that was asserted, at least in theory, for nearly 700 years. In its primary stage, the resurrected Western Empire endured as an effective political entity for less than 25 years after the death of Charlemagne in 814. The reign of his son and successor, Louis I, was marked by feudal and fratricidal strife that climaxed in 843 in partition of the empire. For an account of the growth, vicissitudes, and final dissolution of the Frankish realm. 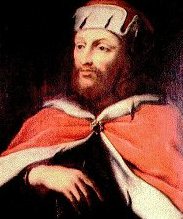 (Image of Otto I)

Despite the dissension within the newly created Western Empire, the popes maintained the imperial organization and the imperial title, mainly within the Carolingian dynasty, for most of the 9th century. The emperors exercised little authority beyond the confines of their dominions, however. After the reign (905-24) of Berengar I of Friuli, also styled as king of Italy or ruler of Lombardy, who was crowned emperor by Pope John X, the imperial throne remained vacant for nearly four decades. In Italy, meanwhile, Roman nobles had usurped the political authority of the papacy. The East Frankish kingdom, or Germany, capably led by Henry I and Otto I, emerged as the strongest power in Europe during this period. Besides being a capable and ambitious sovereign, Otto I was an ardent friend of the Roman Catholic church, as revealed by his appointment of clerics to high office, by his missionary activities east of the Elbe River, and finally by his military campaigns, at the behest of Pope John XII, against Berengar II, king of Italy. In 962, in recognition of Otto's services, John XII awarded him the imperial crown and title.

Otto I the Great (23 November 912 in Wallhausen – 7 May 973 in Memleben), son of Henry I the Fowler and Matilda of Ringelheim, was Duke of Saxony, King of Germany, King of Italy

A Union of Germanic States

The empire in the West, at first an unstable union of Germany and northern Italy and later a loose union of Germanic states, remained in almost continuous existence for more than 800 years. During the Italo-German phase, the empire played a significant role in central European politics and ecclesiastical affairs. A central feature of this period was the mortal struggle between the popes (notably Gregory VII) and the emperors (notably Henry IV) for control of the church. With the Concordat of Worms (1122), an agreement between Emperor Henry V and Pope Callistus II, the emperor relinquished the right of spiritual investiture, or installation of bishops into ecclesiastical office. All the emperors were German kings, and because imperial duties and ambitions inevitably required their full attention, local German interests were neglected.